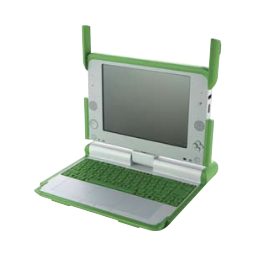 Last year I contributed to the One Laptop Per Child program, and bought an XO Laptop as a part of their Give One, Get One program. I wanted to let my son experience one of these laptops. (As a side note, I think that it is very funny that the OLPC folks are so concerned about children in other countries, but not providing them to children in our country … even if we are willing to pay for them, and the OLPC foundation is not making it’s numbers …)

Well, the laptop didn’t arrive on time, but did show up in mid-January, and I’ve spent some time on and off over the last month or so playing with the laptop. My initial thoughts – it’s pretty cool, and it’s not fully baked yet. I am intrigued enough that I did go out on eBay and bought a second one … just so that I could learn, test, and experiment with some of the peer-to-peer capabilities. So now my son Sam and I both have one. It’s pretty cool to see the built in peer-to-peer networking … when we both boot up, we both see an icon of the other person on our Neighborhood or Friends view.
When I said that the product is not fully baked yet, there are some specific areas that I’m having a lot of trouble getting it to work. But then … since it is Linux, and they do give you a terminal, I’ve been able to get to the command line and file system and work through some of the issues.

One of the first things that you are introduced to is Sugar … the XO Laptop Human Interface. The more that I have learned about it, Sugar is an interesting concept, and there is a very good read about the OLPC Human Interface Guidelines that is also worth reading. It’s actually important to read these, as you will learn that the creators are not interested in making the environment familiar to current computer users, but instead to introduce new models and paradigms to children all over the planet. Once I read through these documents, I began to realize they are pushing out thoughts and research that has gone on for years, but is unfamiliar to most existing computer users. If you use the XO for a while, you’ll see that “applications” are gone, and instead you have “Activities“.

Activities are pretty cool, in that they are zipped up packages that can be easily downloaded and installed over the network. Users can share Activities with friends, and other users can then access and “join” an Activity. If you are a Python programmer, you can very easily create an Activity … there are several tutorials worth reading on the XO Laptop Wiki … Creating an activity … Developers manual … this last link has some great documents and examples at the end of it.
There is also the “Journal” instead of access to the file system. This is also a very important read as it also defines how the student will interact with the laptop, and also how your Activities need to be written. I really liked the initial paragraph about the Journal on the wiki:

We believe that the traditional “open” and “save” model commonly used for files today will fade away, and with it the familiar floppy disk icon. The laptops do not have floppy drives, and the children who use them will probably never see one of these obsolete devices. Instead, a more general notion of what it means to “keep” things will prevail. Generally speaking, we keep things which offer value, allowing the rest to disappear over time. The Journal’s primary function as a time- based view of a child’s activities reinforces this concept.

Yes … the floppy disk is a thing of the past. What was interesting in reading about the Journal was that it reminded me of the research of David Gelernter at Yale called Lifestreams. The key is that you get a time-ordered list of Activities that you have worked on … with the ability to resume them, or open them with other Activities. Key to the Journal is the concept of a student “keeping” things … and the application providing hints on when they ought to kept. In addition, there is a concept of “Falloff” … where older, less used items in the Journal will “fall off” the Journal. This is a form of garbage collection designed to match the natural storage of memories in the human brain.

So what isn’t baked yet? Well … the XO Laptop can’t see any of the FIVE wireless access points at my house! Yes … I read the entire Start page on “connecting” … but that isn’t it. I can manually open a terminal, and use iwconfig and dhclient to get the networking working … but that is a hassle. I have taken the laptop elsewhere and it seems to detect the wireless APs of other places. I will admit that I have some unique SSIDs (that contain slashes) that might be screwing them up … so I might try to poke around the source code looking … 🙂

Other things are that they don’t currently support cut and paste in some places! I’ve been reading the wiki and getting instructions on how to do things … but then I can’t cut from the browser and paste into the terminal. Ugh!

The one thing that I will say is that Sam loves his new laptop. And we have downloaded a whole bunch of the activities, and he is already navigating through Sugar and playing with lots of them. I just got one that is a peer-to-peer game of Connect 4 … he and I haven’t played that one yet … but Andrea and I did … we each won one game. 🙂

I’ll be blogging more about my experiences … I also want to get flash and AIR working on the OLPC … maybe I’ll get that going tonight!

Yes … I touched one! When I was skiing on Sunday at Park City Resort I started down one of the runs and happened to see something laying on the slopes. At first I thought “Uh oh … someone lost their iPhone!”, but instead it was an Apple iPod touch.

Woohoo! Finders keepers? No … but it was my chance to take a look at an iPod touch. I have to say that I am very impressed with the UI. Amazing. It has the Jobs touch.

I dropped the iPod in my pocket and figured that I would notify lost and found when I was leaving. In my rush at the end of the day I got home and remembered that I had the iPod … so I figured that I would play with it and give the lost and found a call. The UI took me only a few minutes to learn, and it really was smooth, and operated like I would have expected … and beyond what I expected. The main menu provided access to the core features, and scrolling with my finger was simple. I really liked being able to ‘flick’ a long list of songs and see it scroll smoothly and quickly down the screen at the proportional speed. You could even attempt to scroll in the wrong direction and you see a strange, almost natural looking, “stretching” against some simulated elastic stop.

The unit that I found was an 8GB iPod … far too small for what I like to carry around with me. I’m still using my 80GB iPod video which is $50 less than the $299.00 price tag on the iPod touch 8GB. I do have to admit that the UI was truly impressive though … an amazing experience.

Well … I looked through the music collection, which was quite varied, and then hit the Settings button where I found the owners name. I then went to Contacts and found there was a record with the full details of the owner – cell phone, address, etc. I called her Sunday night and left her a message … one that I’m sure she never expected to get.

Yesterday I met the owner of the iPod touch up in Park City and returned it to her. It was fun to see her happy to get it back. She gave Andrea and I a little gift, and a card with the following paragraph:

Karma:Â  usually understood as a sum of all that an individual has done, is currently doing, or will do.Â  The effects of all deeds actively create past, present, and future experiences, thus making one responsible for one’s own life, and the pain and joy it brings to them and others.

It got me thinking about another post that I’m going to write.Â  It was fun getting to play with the iPod touch … nice experience.Â  It was more fun surprising the owner who had lost it!