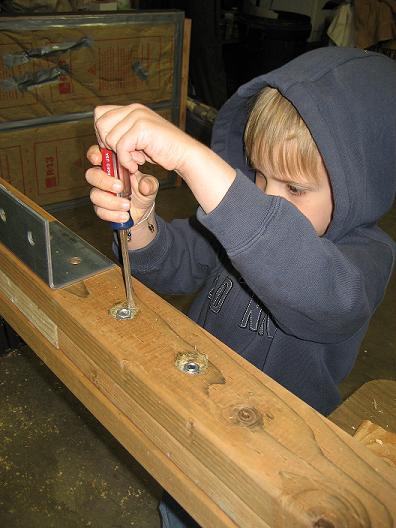 I’m building a fort / platform / swing set for my backyard. It’s been fun working on it with my 5 year old son Sam, and it’s going to be huge. I started by looking at a lot of the wooden sets that you can buy, and realized that for what I wanted to build it would be much cheaper to build it myself. Plus … I love working on projects like this (non-computer work) and thought it would be fun to do with my son.

My original design called for a 8′ by 8′ square platform that would 8 feet off the ground. There would be a railing around the platform, and I’ll slowly add various ways to get from the ground up to the platform … a ladder, a rope ladder, a climbing wall with the various hand holds, etc. The corner posts are built from 12′ 2×4 boards that are sandwiched together and bolted. This picture is Sam assisting me as we built one of the four corner posts. I was able to put together the four corner posts in my garage, then join these with the 2×6 side plates. Then my friend Joe Skehan came up to Heber and assisted me in pulling all of this out of the garage, tilting it up in the backyard, and bolting the other set of side plates on to it.

Of course, this was all done after I found out that I picked the wrong lunber at Home Depot … so it is now a 10′ by 10′ platform! I had pulled 10′ 2×6 lumber instead of the 8′ 2×6 boards I meant to grab. When faced with loading all the lumber back into my truck, or building a bigger platform I immediately acknowledged that bigger *IS* better. 🙂 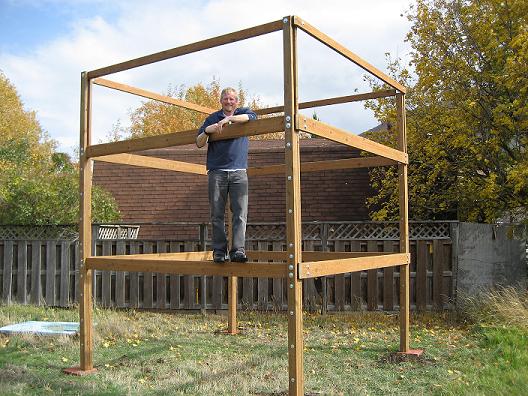 The next step was to dig the holes for the concrete footers for each corner … I’ll have to post more pictures at some point, but I bought some 8″ concrete form tubes, and we dug 24″ down for each corner and placed the tubes … but then this is where I wanted to ensure that I got things square … hmmm … I know that I learned how to calculate all of that back in high school … how did we do that Trig?

So now I just had to ensure that the brackets I was embedding into the concrete were properly spaced … 113.5″ in one direction, 116″ in the other direction, and 162.3″ diagonally from each other. I put some stakes into the ground to hold them into place … and now have a very square foundation for the fort. This weekend I’ll be tightening up the bolts, adding a few brackets to strengthen the fort, and beginning to add the joists to the platform. I want to see how far I can get before winter comes on strong.